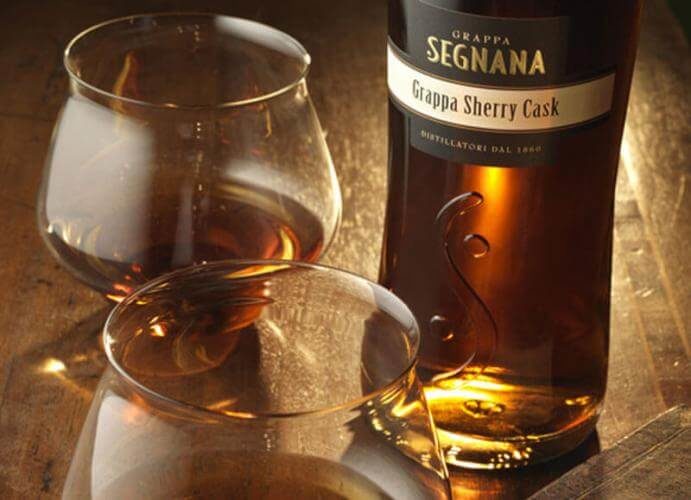 Segnana’s Sherry Cask grappa is an Oscar winner: according to the judges of the International Wine Awards, known in the trade as the Wine Oscars, it is in fact the “Best Grappa of 2016”. This victory was decreed as a result of the votes of the readers of Bibenda, the magazine published by Franco Maria Ricci for the Italian Sommeliers’ Foundation, and celebrated by an audience of politicians and other authorities, artists and representatives of the wine world who gathered together on 24th April at the prestigious Rome Cavalieri Hotel. It was an evening that revolved around good wine (and good grappa!), but also glamour: a real “Night of the Stars” presented by Caterina Balivo, which will be broadcast on Rai 2 in June. The presenter, calling Marcello Lunelli, President and Technical Director of the Distillery, on stage, introduced Segnana as “part of the history of Grappa since 1860, which, thanks to its great tradition and innovative techniques, creates distillates that are refined and harmonious”. Segnana’s Sherry Cask represents this perfect synthesis between history and innovation: produced by re-distilling the phlegma, in line with Segnana’s patented method, it then remains for a long time in precious barrels used for the production of Spanish sherry, which give it an absolutely distinctive aroma and its typical amber colour. Its base is a grappa that skilfully combines white grape pomace from Trentino – from grapes used for the Ferrari sparkling wines, which give the final product delicacy and elegance – with marc from Trentino’s red grapes, which confer fruitiness and persistence. The International Wine Awards have celebrated its absolute originality and pleasure-giving style, confirming Segnana as a producer of true excellence. This is a very sought-after accolade, which in the past seventeen editions the Lunelli Group has already won four times with its Giulio Ferrari as “Best Sparkling Wine” and just missed out on in 2014 with the Segnana Solera di Solera, one of the three finalists that year, the first in which the category devoted to grappas was introduced.